Sunday night was the event of the year for the NFL and an amazing event it was. The entire country tuned in to watch Super Bowl XLVII live from New Orleans as Ray Lewis and the Baltimore Ravens took on the San Francisco 49’ers. Let’s face it, the Patriots didn’t make it to the big game but it was an awesome night from start to finish and for those of you that missed all the entertainment, I’ve got everything you missed right here!

In an emotionally fitting opening to the game and in tribute to the victims of the Sandy Hook school shooting, the Sandy Hook Elementary School chorus took to the stage with the lovely Jennifer Hudson to sing “America the Beautiful”. What a perfect way to pay homage to the students and families involved. The shining faces of the children and their young voices coupled with Hudson’s vocals were enough to make the harshest critic choke back a tear.

Next up to sing the Star Spangled Banner was the beautiful Alicia Keys wearing a gorgeous floor length cranberry colored gown and Alicia just wouldn’t be Alicia without being accompanied by a beautiful, grey grand piano with gold trim. Now, I love Alicia Keys because she stands apart from any other artist and not to be out done she performed a simple rendition of the song with an A. Keys spin on it. Simply effortless. Classic.

Photo by Robert Deutsch via hiphopwired.com

Now, there had been talk for weeks about Beyonce’s Super Bowl hit time show. What will she perform? Who will she bring out? Will she be good? Well to all of the naysayers: Beyonce Rocked the house!  Appearing out of nowhere on a stage that showcased silhouettes of her face, Beyonce emerged from the dark, decked out in a black leather minidress, black over the knee socks and black ankle booties singing an acapella version of “Love on Top” and opened with super hit “Crazy in Love”. Her electric choreography and dance sequences were explosive and so were her all-female dancers and all-female band. The stunning singer rocked out with her purple haired guitarist who played a spark spewing electric guitar.

The lighting show was outrageous as she danced along an LED wall seductively to “Baby Boy”. And for the surprise of the night – Destiny’s Child (Kelly, Beyonce and Michelle) all reunited together on one stage. The DC ladies came out to “Bootylicious” and the crowd erupted. They went on to sing their “Charlies Angels” hit “Independent Women” in perfect harmony on a flame lit stage. It was as if they never separated and had been practicing for year for last night. The ladies joined Beyonce in singing “Single Ladies” and then Beyonce or “B” closed the night out with a powerful solo performance of “Halo”. Her voice rocked the stadium and the crowd turned Cobalt Blue as fans waved blue hand held lights back and forth. To anyone who had their doubts about the power of Beyonce, she literally set the stage on a blaze! In one night, she single handedly raised the bar. Next year we’ll see if anyone can reach that high.

Yes it was fantastic halftime show. It was extremely entertaining but the real entertainment of the game came just in the beginning of the 3rd quarter, when just after WR Jacoby Jones of the Baltimore Ravens broke the record for the longest kick return in Super Bowl history with a 109 yd run…the lights went out – literally. The lights in the Mercedes Benz Superdome went out in half of the stadium, leaving half of the fans, players and coaching staff in darkness. It was the first time in NFL history that has ever happened. The game was forced to take a 30 minute pause, which left the Ravens offense and Niners defense off the field for an hour and 30 mins. 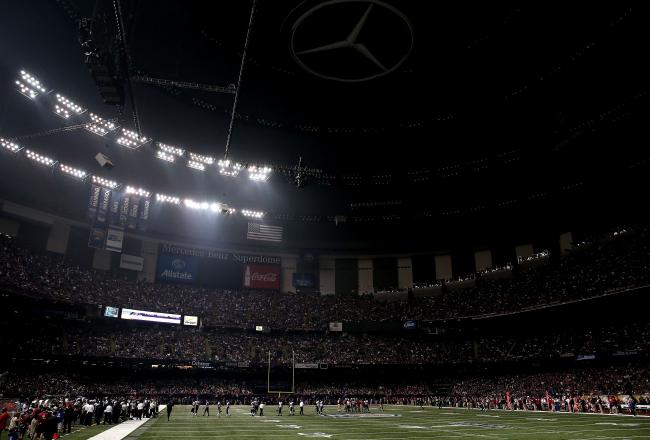 Immediately following the “black out”, twitter exploded with tweets from fans and celebrities both watching live from the stadium and everywhere else in the world. Many of the tweets joked that the power outage was due to Beyonce’s elaborate halftime show, however the city of New Orleans has taken full responsibility and apologized for the comical slip-up. Here are some of my favorite tweets from the night.