At age 23, Patrick Mahomes can be considered a kid, or maybe even a baby GOAT, which are also called kids.  Mahomes will be facing THE GOAT this Sunday who goes by the name of Tom Brady.

The Greatest Of All Time has earned this status over his 19 years in the league and five Super Bowl titles.  On Sunday, 41 year old Brady will be dueling a kid 18 years his junior for the AFC Championship.

Let’s take a look at how the baby goat matches up with the buck, on and off the field.

Tom Brady is the son of Tom Brady Sr. who almost became a Maryknoll priest. New England Patriots fans don’t even want to think what would have happened if Brady Sr. chose the life of celibacy instead of marrying Gaylynn Johnson, a  flight attendant. The family settled in San Mateo, California where Tom grew up with three older and very athletic sisters.

Patrick Mahomes is the son of Pat Mahomes, a former major league pitcher.  The elder Mahomes played for 7 different teams including the Boston Red Sox.  Patrick Lavone Mahomes II has a younger brother and sister.

Brady was not good enough to start at quarterback on his 0-8  JV football team.  His best high school sport was baseball where he was a left handed power hitter and catcher. He was drafted by the Montreal Expos in 1995.

Mahomes was also a stand out three sport athlete at Whitehouse High School in Whitehouse, Texas.  In his senior year he threw for 4,619 yards and 50 touchdowns.  He also tossed a no hitter with 16 strikeouts his senior year.

Brady attended the University of Michigan where he struggled for playing time for several seasons. The Wolverines won 20 of the 25 games Brady started.

At Texas Tech Mahomes started 32 games over his three year college career.  In 22 of those games he threw for over 300 yards. In a game against Oklahoma, Mahomes threw for a record 734 yards.

By now the entire planet knows that Tom Brady was famously snubbed by every team in the league and was finally selected by the New England Patriots with the 199th pick in the 6th round of the 2000 NFL Draft.   The rest is history.

The Kansas City Chiefs took Mahomes with the 10th pick in the 2017 draft.

In his first season as a starter, Mahomes is team MVP after throwing for 50 touchdowns and for over 5,000 yards.

Brady is married to super model Gisele Bundchen, one of the most successful fashion models and business women in the world. Mahomes girlfriend, Brittany Matthews was a varsity soccer player at University of Texas Tyler, and had a short pro stint in Iceland.  She now runs a personal training business. 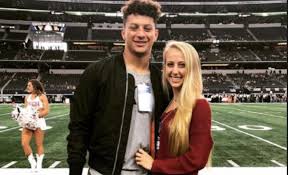 Tom Brady has a regimen that includes 12 to 25 glasses of water a day,  lots of smoothies, and TB12 snacks.  He never mixes proteins with carbohydrates, and always tries to mix proteins or carbs with vegetables which is “ideal ” for digestion.  No nightshades which include tomatoes.  As for dessert? “Nothing, at least on an average day.”

Meanwhile Mahomes is a ketchup junkie. (nightshade alert!)  His love of the condiment has landed him an endorsement deal with Hunts. Mahomes is known to put ketchup on everything from steak to macaroni and cheese.  Yum!

GOAT vs Kid. Bring it on. And pass the ketchup.